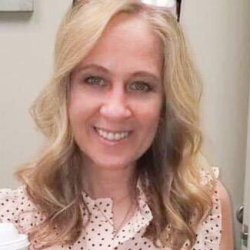 As an administrator of Migraine Strong Facebook Group, there is a little internal pressure to always be in control of my symptoms. I feel like it’s my job to feel good and to help others do the same. But, the truth is, I’m not always in control and I don’t always feel good.  Just like you, I am constantly fighting to suppress my vestibular migraine symptoms. There are days when I feel great and it feels easy and other days when it’s so hard I wonder if I can continue doing it.

While Migraine Strong writes about the latest in migraine treatments, this is not medical advice. We are patient educators and all information you read should be discussed with your doctor.

Recently, I had a few of those hard days.  Over the last couple of weeks, I’ve been experiencing vertigo spins every day. They were mostly slow spins that lasted just a few moments and left me feeling nauseous with an occasional hard spin that had me “calling Ralph”.  On top of that my hearing sounded occasionally muffled, I began to feel a slight outward push of pressure and hear wisps of wind going through my right ear.  Like most of my VM attack symptoms I figured they would soon pass, but they lingered.

It occurred to me that these were the exact subtle symptoms that I experienced just before my first attack of VM onset that left me housebound for months.  That realization filled me with panic and fear that another big attack was on its way.  So I reached for my rescue medication and called my doctor thinking he’d call in something else to kick it out but instead, he wanted to see me in person.

So off I went to Tampa for further vestibular testing like I had so many times before not too worried about how my tests would turn out because I’ve been down this road many times.  The hearing tests came first. The audiologist completed pure tone testing, bone conduction and voice testing & let me know right away that even though there were a couple of minor mistakes, all was well in the hearing department.  Phew! Then we moved on to the ECoG test.

For those of you that have this coming up I’ll put your mind at ease because as medical tests go, this one is pretty easy.  They brought me to a small room with a lazy boy recliner in the center of it.  My job was to lay in the recliner and be as still as possible while they played a series of jackhammer noises in my ear and tested my ear’s response to it. They placed some gritty soap on my forehead and into my ears and then taped a foil sticker to my forehead and placed foil wrapped earbuds into my ears.

I knew right away that there was a problem with my right ear because it’s never a good sign when one ear does not test as smoothly as the other. One more series of four jackhammer sounds and the audiologist informed me I was done. I asked about the lengthy right ear process and she said sometimes it just takes a little longer to get an accurate reading.  She informed me she’d interpret the results and get them right over to doctor Danner.  No raving review this time…hmmmm.

I sat in the waiting room waiting to be called back into a room bracing myself for bad news.  A few minutes later doctor Danner gently explained the results of my ECoG showed endolymphatic hydrops in my right ear.  I have a degree in Speech Language Pathology and knew right away what that meant…Meniere’s Disease, but he wasn’t saying the words.

He was kindly explaining that it takes my right ear immense effort to function. So while I still have my hearing, my inner ear has to work really hard to do its job.  He talked about inflammation and leaking of my endolymphatic sac and how my sodium ion channels are not appropriately functioning.  He talked about diet and medication to control it.  I tried to listen but, it was pretty technical and I was freaking out inside waiting to hear the words.  He finally said the test was completed to determine Meniere’s Syndrome.  Frack!

Wait Meniere’s Syndrome, what is that? Isn’t it called Meniere’s disease?

He explained that Meniere’s disease is a collection of symptoms making it more of a syndrome (meaning they don’t know the cause and it’s likely a collection of disease) and another vestibular condition that seems to be evolving.  What do I mean by collection of disease?  Well, some might have Meniere’s disease after prolonged use of an oto-toxic drug, others might have experienced head or neck trauma while others might have contracted a virus or fungal infection that attacks the inner ear, among many other theories.  There is more research to be done.

Because a cause hasn’t been identified, the disease or “syndrome” is defined by four main symptoms. The first is a spontaneous attack of prolonged vertigo (spinning and dizziness).  The second is fluctuating hearing loss before, during or right after the vertigo attack. The third is tinnitus (ear ringing or the perception of sound) that rises with the attack and then abates but, doesn’t fully go away. The fourth symptom is a sensation of the affected ear’s canal filling up, what I call pressure. Most people start with just one affected ear but, it’s a progressive disease and can later develop into both. There are of course a variety of other symptoms, but those four (along with vestibular testing) determine the diagnosis.

How I handled it

I really should not have been as surprised as I was.  I have never been able to kick my ear symptoms even when my other VM symptoms are well controlled. I’ve had tinnitus and occasional drop sensations since VM onset. Doctor Danner has also mentioned in the past that maybe I have “Meniere’s mild” but that symptoms are so similar to vestibular migraine the diagnosis is muddy and hard to determine and nothing changed for me after he said that in the past.  There was no change in my treatment plan, so I was never bothered by it because with a muddy diagnosis, it could have just been the VM I’ve had for the last three years. But this time it’s confirmed, the test results laid out on a scary graph in front of me with my right ear plummeting toward the bottom of the page.

All of the things I learned in school came rushing back into my head.  This disease is not promising. Diseases of unknown causes don’t lend themselves to easy treatment. It won’t kill you, but it is likely to make life miserable in ways that few other diseases can. When Meniere’s disease is at its worst, it takes your inner ear which means not only do you lose your hearing, but also your sense of balance. Because your inner ear isn’t just responsible for hearing, it also tells your brain where you are in space.  So what begins with vertigo, dizziness and loss of balance ends with loss of hearing. The possibility of losing my hearing and living a life without balance is terrifying.

As I headed back to the car feeling scared and broken I started to cry and honestly, I didn’t stop for days. I don’t look sick yet, I have this illness affecting my life in a suddenly permanent and profound way. We take our balance for granted because it’s always there working quietly in the background keeping us stable, but it comes with no guarantees. It can fail us. Mine is failing me leaving me feeling sorry for myself and defeated.  I’ve worked really hard to gain control over my vestibular migraine symptoms and I was doing a pretty good job of suppressing symptoms most days.  But, here I am with another diagnosis…vestibular disease number two to confront and fight.  This curveball feels all-encompassing like it’s blanketing me with its weight in every moment.  But, maybe that’s just how unexpected curveballs feel?

I’m currently trialing a new medication to help relieve the ear pressure & vertigo and will need to be even more restrictive with my diet which now includes low salt to help keep my inner ear stable.  It’s nearly impossible to find pre-made food items without salt.  So i’m back to eating only whole fresh fruits, vegetables and meats and very little processed foods. I will slowly begin the John of Ohio supplement regimen that some with Meniere’s disease have had success with and I’ll keep you posted on how that goes.

I’m committed to do the work it takes to fight this disease… err syndrome and while it might not sound like it, I did leave Dr. Danner’s office full of information and hope.  So, I’m done crying and am working on making every day the best it can be.  I’m determined to bring vestibular disease awareness where there is none and to inspire others, in hopes someone will say because of you I never gave up. I’ll breathe, play outside, enjoy the sunshine, spend time with family & friends, follow my treatment plan, help others and let the little joys soak in as I keep taking small steps forward doing the next thing while learning to adjust my swing.  Dern curveballs!

If you would like to know more about my story, you are always welcome to reach out to me in our closed Facebook group Migraine Strong. If you are finding your way through your own vestibular diagnosis please visit Vestibular Disorders Association (VeDA) where you’ll find a wealth of information, resources, stories and support. VeDA also has a presence on Facebook and Instagram. Doctor Timothy Hain who’s based at The Chicago Dizziness and Hearing Clinic has a website full of information as well which helped me understand the Vestibular Migraine – Meniere’s Disease connection.

I was diagnosed with Vestibular Migraine in 2016 and my neurotologist added a Ménière’s Disease mild diagnosis in 2018. I went from being housebound for months to working full time and living an active full life by following the Migraine Strong treatment pie. Preventive medications, the Heal Your Headache Diet and supplements do a lot of the heavy lifting in relieving my symptoms. You can also find me over on The Dizzy Cook blog baking yummy head safe goodies on a guest post each month.

View all posts by Jennifer Bragdon